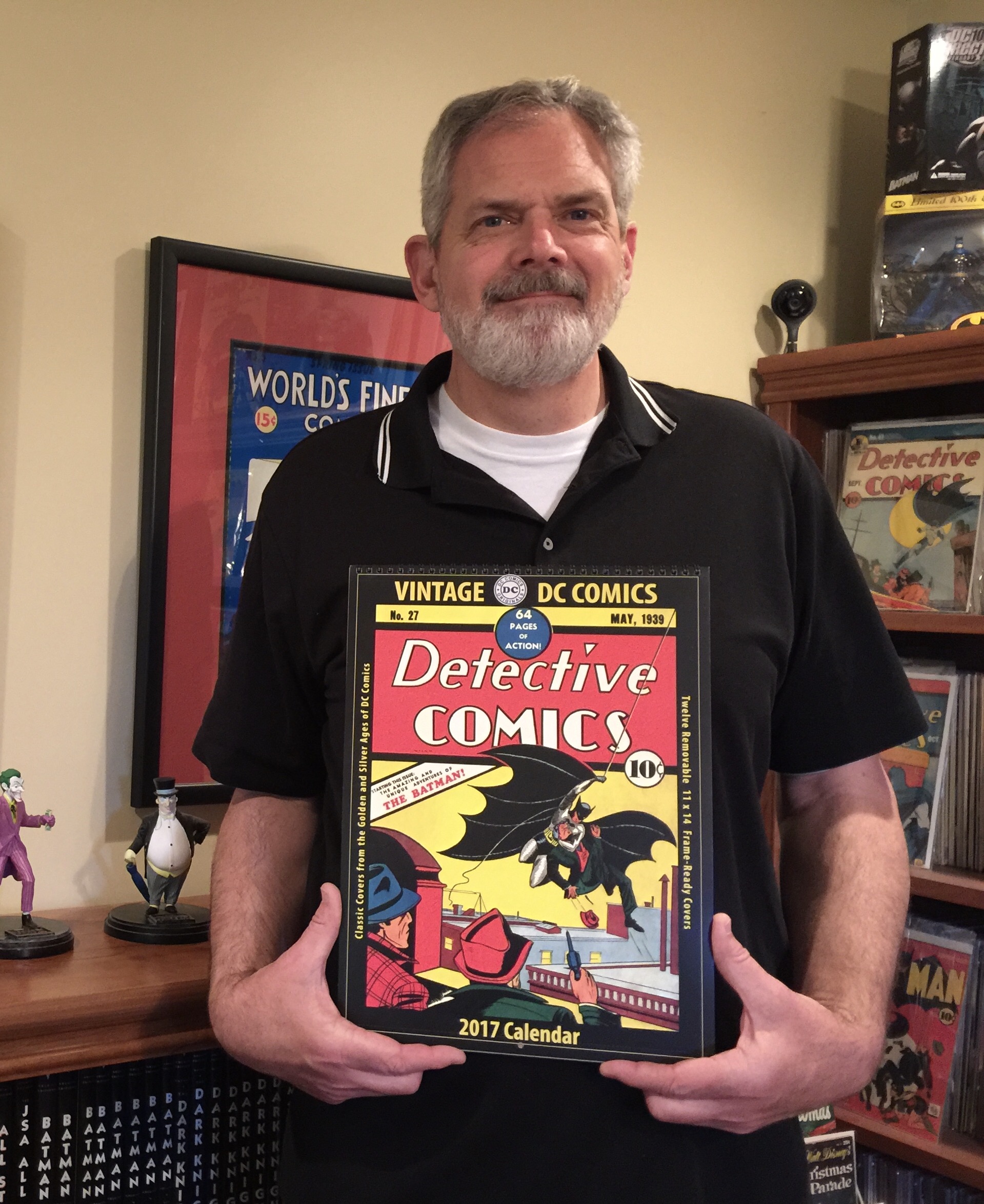 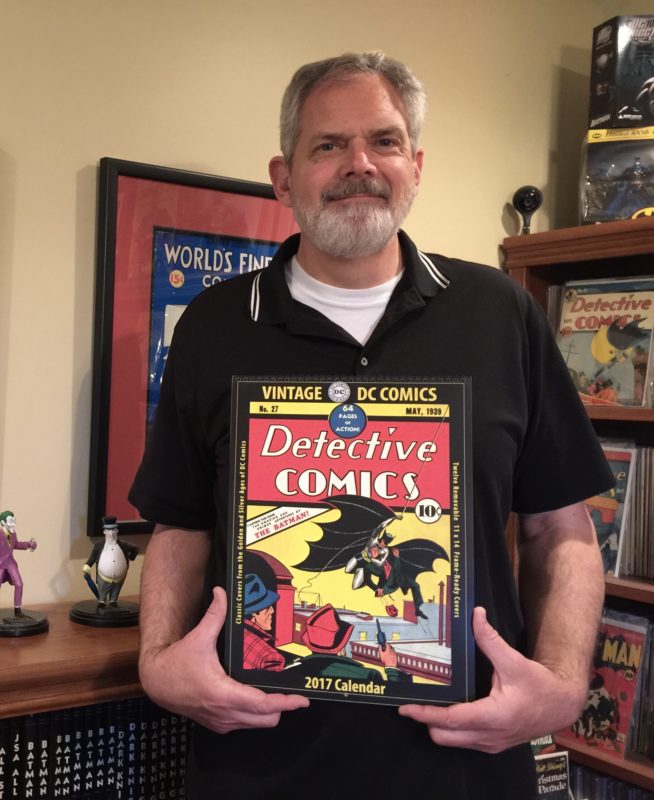 Today we’d like to tip our hats to Bill Jourdain, and share a very brief interview we conducted with him recently – Our little way of showing appreciation for all he’s done for us.  Bill has has an extensive collection of comics spanning the 1930’s to the 1970’s and has penned articles about the Golden Age of Comics for Alter-Ego Magazine and Comics Now! magazine, and has maintained websites devoted to the Golden Age of Comic Books and the Golden Age of Batman.  On to the interview!

Andy A/P:  You have provided Asgard Press with so much fantastic, insightful, and detailed content for our Marvel and DC products over the years and of course we’re so appreciative and grateful.  Your research is clearly a labor of love.  Can you please tell us a little bit about where your inspiration and thirst for knowledge on the subject comes from?

Bill:  I have had a lot of fun working with Asgard Press.  I’ve been a fan of comic books since I was a child, and have been a “serious collector” for over 40 years.  I’ve always enjoyed the Golden Age comics the most.  This love of Golden Age comics led me to produce the “Golden Age of Comic Books Podcast” over ten years ago, and a web site, Goldenagecomics.org a few years later.  These projects led to a lot of research about the origins of many of these comic book characters that have now become pop culture icons.  I stopped producing the podcast after 65 episodes and the web site has not been updated in a while, but taking the time to learn more about the origins of this popular form of entertainment caused me to appreciate the history of these four color masterpieces even more.  My work for Asgard Press was just a natural extension of this love of comic books that I have had for over 40 years!
Andy A/P:  Would you have ever dreamed that Marvel and DC would have turned into the empires they’ve become – from blockbuster movies and television series to Comicons and Dragoncons popping up worldwide?  Do you yearn for the “Golden Age of Comics,” or are you all in with what’s going on today?
Bill:  The Marvel and DC Cinematic Universe has not only highlighted this great four-color form of entertainment, it has caused a lot of fans to want to explore the origins of their favorite characters.  While I prefer the Golden Age of comics, I have greatly enjoyed each and every one of the Marvel and DC movies and the great tapestry they have woven.  I especially enjoyed “Captain America: The First Avenger”, as it explored the Golden Age version of the character, but in a modern light.  With the popularity of these movies, we are seeing the fan base at comic book shows asking more questions about the Golden Age and Silver Age incarnations of the characters and having a genuine interest in the original comic book appearances.  So, while I prefer the Golden Age, the movies have resulted in a nice blending of the old and the new, such that the fans of the older comics have something to be excited about every time a new Marvel or DC movie hits the silver screen! 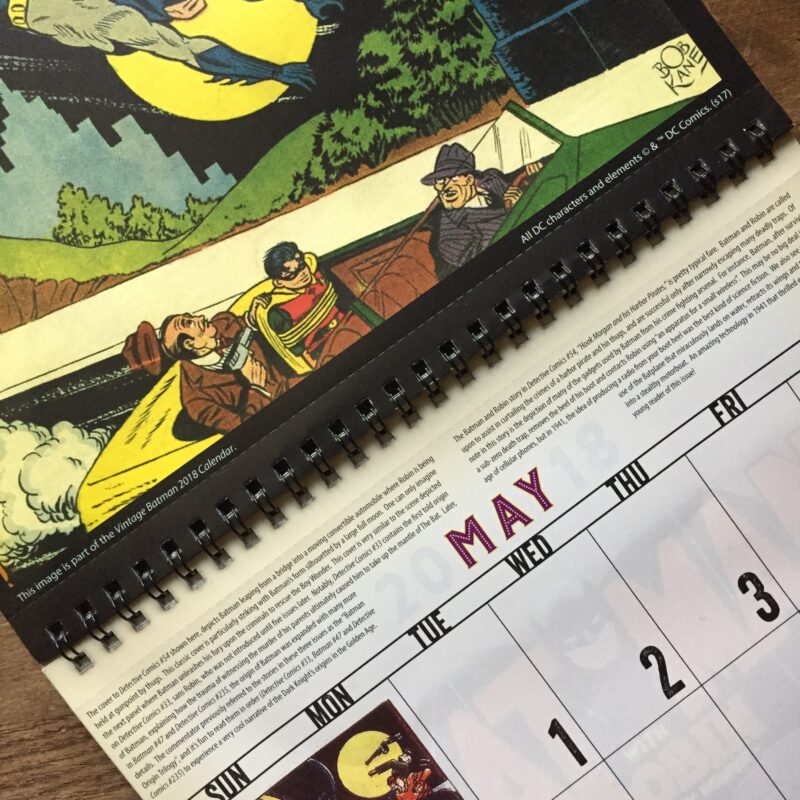 Commentary from Bill in the 2018 Vintage Batman Calendar for May. Click the image to purchase the calendar and get to read close-up when you receive your order in person! 🙂 .

Again, we salute you Bill and thank you for all you do for us and your time today!
Bill resides in north Georgia with his wife and children, and somehow finds time away from comic books to practice law.