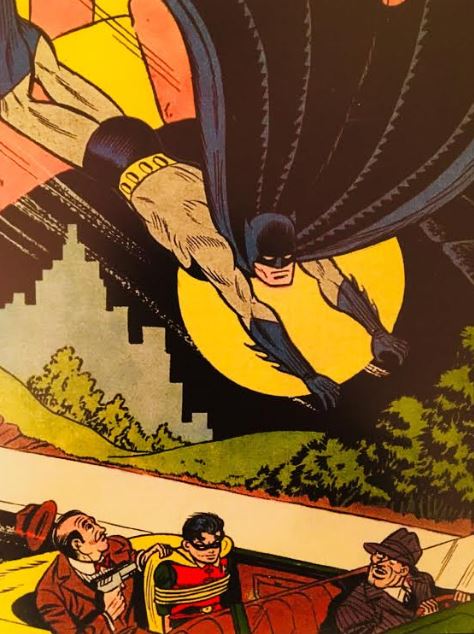 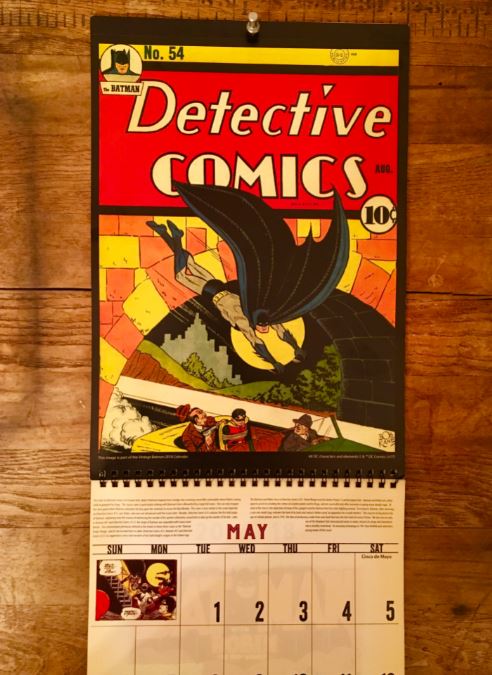 Batman calendar above, depicts Batman leaping from a bridge into a moving convertible automobile where Robin is being held at gunpoint by thugs.  This classic cover is particularly striking with Batman’s form silhouetted by a large full moon.  One can only imagine the next panel where Batman unleashes his fury upon the criminals to rescue the Boy Wonder.  This cover is very similar to the scene depicted on Detective Comics #33, sans Robin, who was not introduced until five issues later.  Notably, Detective Comics #33 contains the first told origin of Batman, explaining how the trauma of witnessing the murder of his parents ultimately caused him to take up the mantle of The Bat.  Later, in Batman #47 and Detective Comics #235, the origin of Batman was expanded with many more details.  The commentator previously referred to the stories in these three issues as the “Batman Origin Trilogy”, and it’s fun to read them in order (Detective Comics #33, Batman #47 and Detective Comics #235) to experience a very cool narrative of the Dark Knight’s origins in the Golden Age.

The Batman and Robin story in Detective Comics #54, “Hook Morgan and his Harbor Pirates,” is pretty typical fare.  Batman and Robin are called upon to assist in curtailing the crimes of a harbor pirate and his thugs, and are successful only after narrowly escaping many deadly traps.  Of note in this story is the depiction of many of the gadgets used by Batman from his crime fighting arsenal.  For instance, Batman, after surviving a sub-zero death trap, removes the heel of his boot and contacts Robin using “an apparatus for a small wireless”.  This may be no big deal in the age of cellular phones, but in 1941, the idea of producing a radio from your boot heel was the best kind of science fiction.  We also see an early use of the Batplane that miraculously lands on water, retracts its wings and transforms into a stealthy motorboat.  An amazing technology in 1941 that thrilled each and every young reader of the issue! 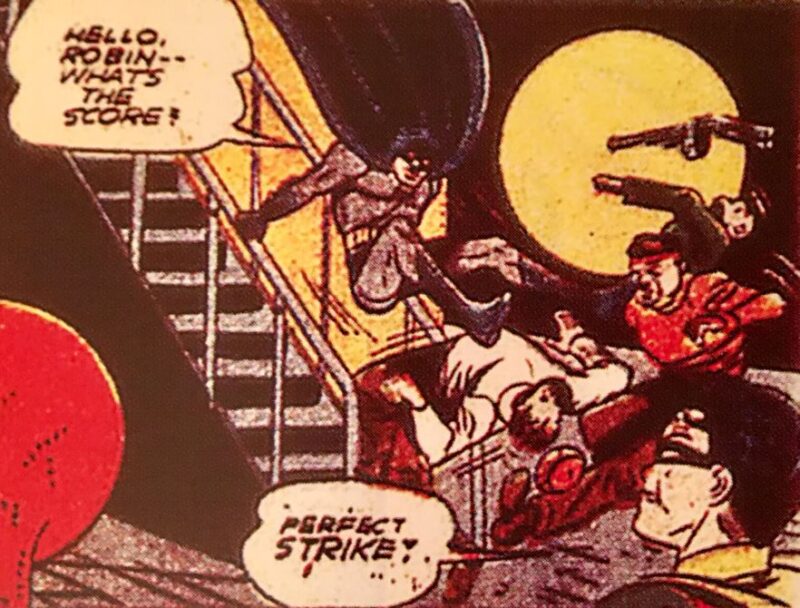 Expert commentary provided by our good friend and comics expert, Bill Jourdain.   If you are interested in purchasing the 2018 Vintage Batman Calendar in which this story appears for 50% OFF the normal price, simply click HERE.