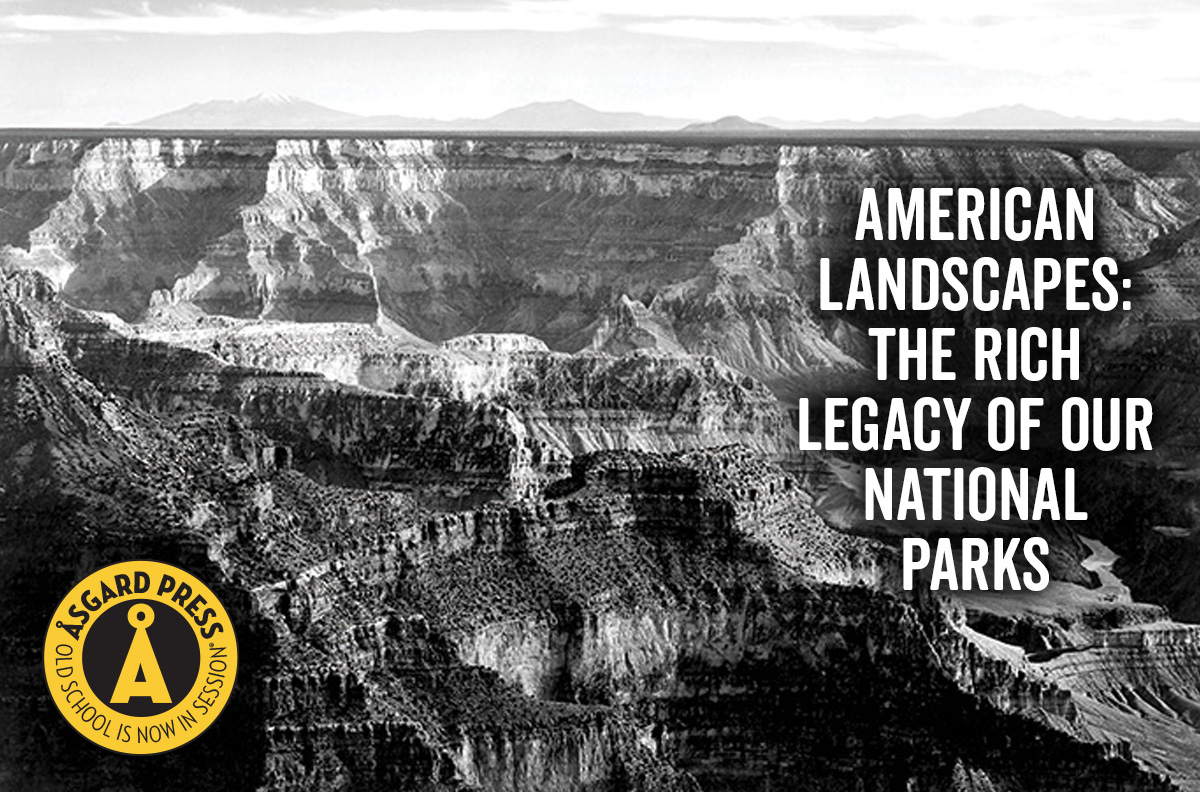 American Landscapes: The Rich Legacy of Our National Parks

Our love of the great outdoors and wide, open spaces is part of the fabric of American life. In 1903, a tour of Yellowstone, the first US national park, by naturalist and early conservationist John Muir led then-President Teddy Roosevelt to preserve more American landscapes through the establishment of numerous national parks, national monuments, national forests, and wildlife preserves. Since the establishment of Yellowstone National Park in 1872, the United States has designated over 84 billion acres of land as national parks, monuments, and other natural or recreational areas, to be conserved for the use and enjoyment of visitors and for the preservation of native plants and animals. 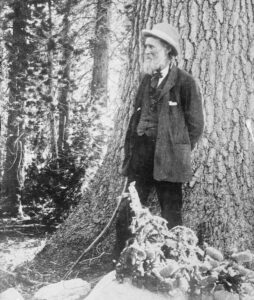 Our rich array of national parks includes lakes, mountains, glaciers, craters, deserts, caverns, rivers, and more incredible natural features. Every year, over 300 million people visit national parks, where they can hike, ski, canoe, kayak, camp, and simply enjoy the great outdoors. To raise awareness and attract visitors in its early days, the National Park Service issued tourism posters, some of which you can see in our post from June 7, 2022 entitled Explore America With This Gallery of Vintage National Park Posters. National Parks have also been a favorite subject of photographers such as Carleton Watkins, Eadweard Muybridge, and the Kolb Brothers, who operated Kolb Studio on the South Rim of the Grand Canyon from 1904 to 1976. 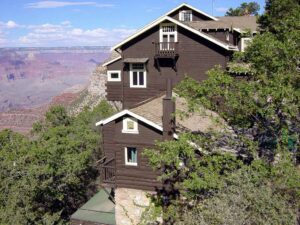 Perhaps the most famous photographer to document America’s national parks was Ansel Adams. Adams was commissioned by the National Park Service in 1941 to take photos of several national parks and monuments for the creation of a mural that would reside at the Department of the Interior building in Washington, DC. The advent of World War II brought about the cancellation of the project, but the photographs remain in the holdings of the National Archives and Records Administration. These artfully composed images capture the majesty, scale, and wonder of our American landscapes through Adams’ trademark use of photographic contrast.

Presented below are five of Ansel Adams’ national park photos, along with commentary about each park. These black and white images showcase the untouched natural features at the center of the National Park Service preservation efforts. Each individual photograph is beautiful but collectively they paint a greater picture of our uniquely American landscapes. 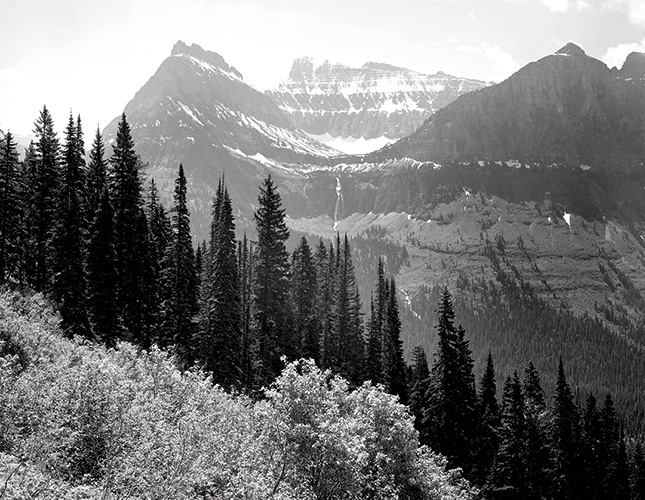 Glacier National Park encompasses over one million acres of land and is located in Montana along the Canada-U.S. border. Originally occupied by Native Americans, primarily the Blackfeet and Flathead (Salish), the lands of the region were designated as a national park under President William Howard Taft in 1910. Glacier National Park is known for its soaring mountains, carved and shaped by glacial action. The rocks of the park contain well-preserved Proterozoic sedimentation, and feature some of the earliest fossils on Earth. Glacier has maintained a remarkably intact ecosystem, providing researchers with an abundance of subject matter. Science has also benefitted from the park’s global climate change research program. Recreational visitors can enjoy hiking, camping, and guided tours in one of the park’s unique Red Jammers, restored motor coaches from the 1930s which have been converted to run on propane to help preserve the environment of the area. 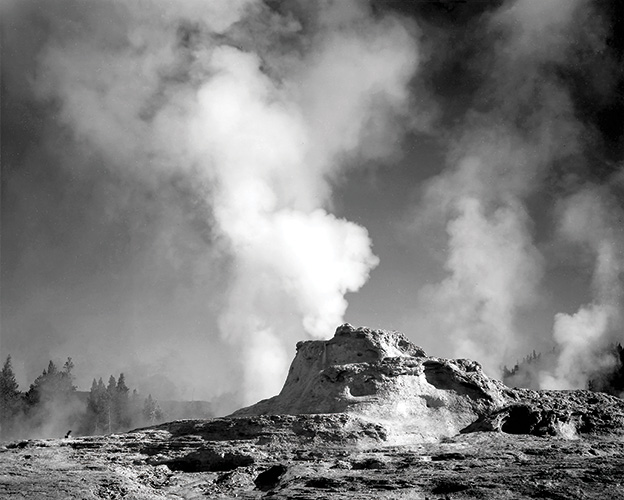 Yellowstone National Park, the first national park in the United States, was established by Congress and signed into law by President Ulysses S. Grant in 1872. It is located primarily in Wyoming but also extends into parts of Montana and Idaho. While popular for its forests and wildlife, Yellowstone is perhaps best known for its geysers, particularly Old Faithful, arguably the most famous geyser in the world. Although occupied by Native Americans for at least 11,000 years, the first exploration of the area by non-natives began in the 1860s. In 1871, a government-sponsored expedition resulted in a detailed report, large-format photos and paintings, and specimens that helped convince Congress to officially protect this 3,468.4 square mile area. Yellowstone is home to numerous species of animals, birds, fish, reptiles and amphibians, including some that are threatened or endangered. Bison and elk roam freely in the forests, as well as grizzly bears and wolves. Human visitors enjoy camping, hiking, fishing and observing the many geysers and other sights within the park. 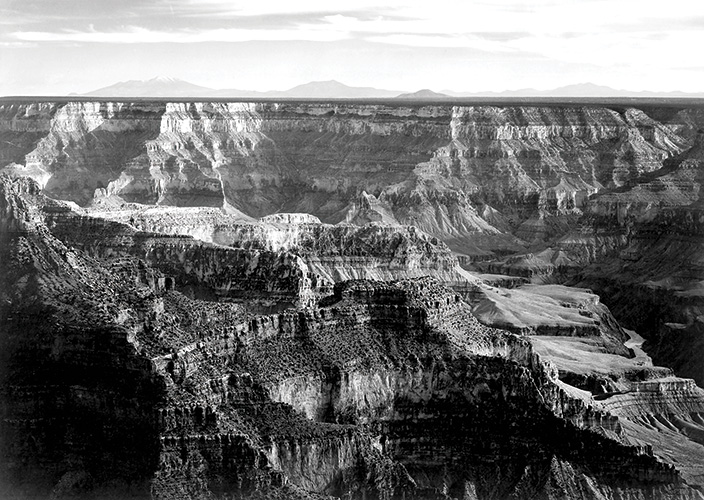 Grand Canyon National Park is located in northwestern Arizona and is home to the world-famous Grand Canyon, a spectacular land formation carved by the Colorado River. It is the second most-visited national park in the United States, after Great Smoky Mountains National Park. Grand Canyon became a tourist destination in the 1880s after the advent of railroad travel to the area. The region officially became a national park in 1919 under President Woodrow Wilson. The park is best known for its sweeping vistas, with most visitors arriving at the South Rim where both walking and driving tours are available. Outside of the North and South Rims, the park remains remote with limited accessibility. President Theodore Roosevelt, who visited Grand Canyon in 1903, described it as “…beyond comparison—beyond description; absolutely unparalleled…” This is a sentiment still shared today by the millions of visitors to Grand Canyon National Park each year. 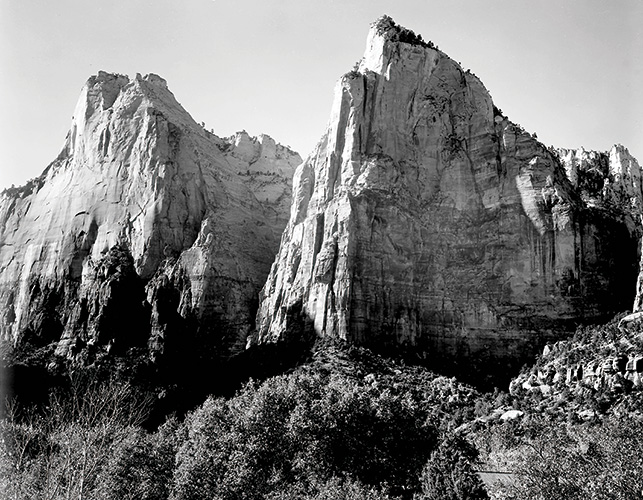 Zion National Park is located in southwestern Utah. Although native peoples have occupied the area for at least 8,000 years, Mormons first settled in the region in the 1860s. The park was originally created as Mukuntuweap National Monument in 1909. In 1919, Congress enlarged the protected area and redesignated it as a national park, changing its name to Zion, a term used throughout the surrounding Mormon population. In 2009, when President Barack Obama signed the Omnibus Public Land Management Act into law, a large swath of the park was designated as the Zion Wilderness, with further protection. Zion National Park is renowned for its scenic canyons, mountains, rivers and rock formations, and for its incredible plant and animal diversity. Some of the more well-known features of the park include Zion Canyon, Horse Ranch Mountain, and Checkerboard Mesa. Hiking, backpacking and camping are popular activities for today’s visitors. 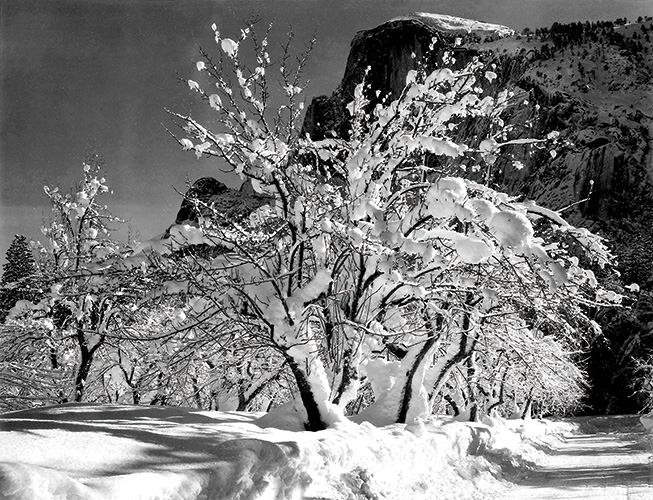 Yosemite National Park is located in Central California along the Sierra Nevada mountain range and is bordered by two national forests. The park was first established in 1864 when President Abraham Lincoln signed the bill creating the Yosemite Grant to protect the area, making it the first lands to be reserved for preservation under the U.S. government. Congress officially made Yosemite a national park in 1890, although portions of the park remained under state control. The full area of Yosemite National Park was returned to federal management in 1906. Yosemite has a high volume of visitors each year, who come to enjoy the striking scenic views of peaks, valleys, lakes, streams and waterfalls. The park is popular with photographers and artists, tourists, hikers, rock climbers, stargazers, skiers and many others. Yosemite is open year-round, with activities available for every season, and is often featured as a movie location. 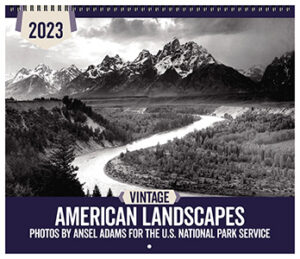 Asgard Press has curated a selection of vintage photos by Ansel Adams for the National Park Service for the 2023 Vintage American Landscapes Calendar, a collection of 13 prints that are easily detached from the calendar and fit standard sized 11”x14” frames. Enjoy the majesty of our national parks all year, and for years to come.