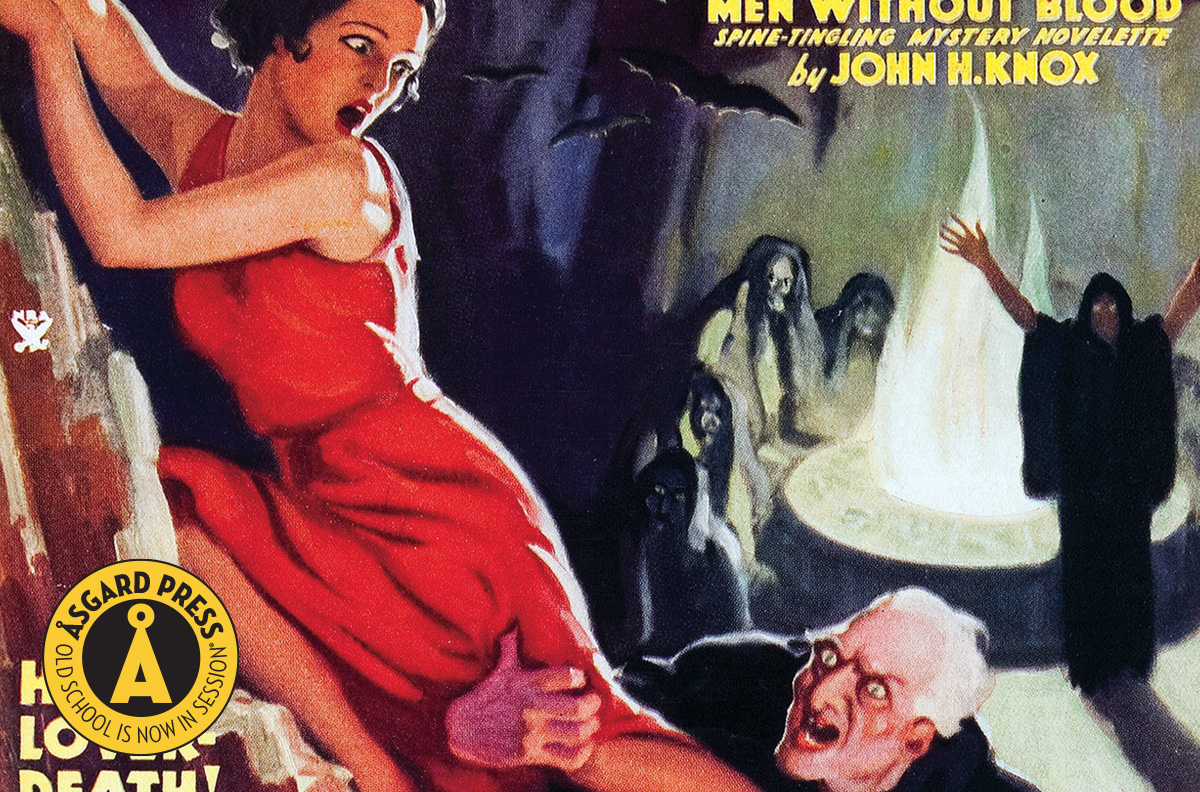 Halloween is just around the corner, so it’s the perfect time to cozy up with a warm drink, a fuzzy blanket, and a good horror story. We’ve rounded up a few of our favorites that have been featured in our Vintage Pulp Horror calendars, along with commentary by pop culture historian Dr. Arnold T. Blumberg. The best part is that you can read these vintage pulp horror magazines in their entirety online! If you would like to see more pulp horror covers and commentary, you can check out our 2023 Vintage Pulp Horror Calendar. 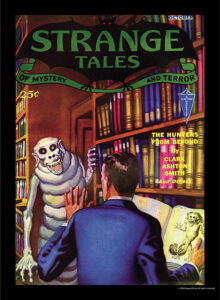 Often featuring tales of fantasy and science fiction, Strange Tales of Mystery and Terror was a serious contender as one of the most successful pulps in its genre, even though it ran for only seven issues. Of the many stories included in this issue, the cover feature by Clark Ashton Smith, “The Hunters from Beyond,” is one of the author’s best-known tales, featuring horrific interdimensional predatory creatures whose movements presage the herky-jerky, teleporting behavior of many movie monsters seen decades later. When the demonic entities feed on a human victim, they drain the person’s mind and return them to our world as a zombie-like figure with no memory; Smith was well known to friends and fans for having a certain creative fondness for rotting corpses in various stages of consciousness. Smith’s work was a major factor in the success of another pulp series, Weird Tales, and positioned him as one of that title’s “Big Three” along with friend and fellow master of the macabre, H.P. Lovecraft, and Robert E. Howard. Other stories in this issue include “The Curse of Amen-Ra” by Victor Rousseau, “The Dead Walk Softly” by Sewell Peaslee Wright, and “The Infernal Shadow” by Hugh B. Cave. Gustav Meyrink, author of The Golem and a towering figure in German-language supernatural storytelling, contributes “Bal Macabre,” translated here by Udo Rall. The issue also features a letter sent by then-fifteen-year-old Forrest J. Ackerman, future publisher of Famous Monsters of Filmland. 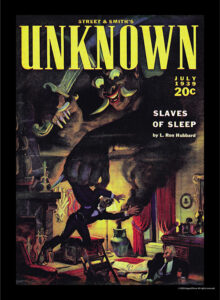 Given Unknown’s reputation as a repository of exceptional talent in the annals of pulp publication, it’s no surprise to come across an issue featuring not one but multiple well-known names in the history of science fiction, horror, and fantasy; these early pulp periodicals, when they are discovered intact (many are sadly in very poor condition), can be extraordinary treasure troves of creativity that helped to define these genres for generations of fans. For example, this particular issue features “Of Things Beyond” by John W. Campbell Jr., whose editorial role on Astounding Science Fiction and authorship of the novella Who Goes There? established him as a major architect of science fiction’s Golden Age; that paranoia-driven horror novella, adapted into film in 1951’s The Thing from Another World and 1982’s The Thing, inspired countless imitators. “Slaves of Sleep,” meanwhile, is a tale offered by L. Ron Hubbard, who later published Dianetics in 1950 and went on to establish the Church of Scientology. Other stories in this issue include “Nothing in the Rules” by L. Sprague de Camp, who wrote over 100 books and is credited with coming up with the abbreviation “E.T.” for “extraterrestrial,” making Steven Spielberg and many 1980s movie-going kids very happy indeed, and “The Joker” by Mona Farnsworth, which was a pseudonym used by writer Muriel Newhall. This issue also features a letter written by none other than science fiction legend Ray Bradbury, who was nearly nineteen at the time.

Read this issue in its entirety here. 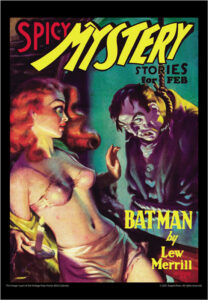 This title was one of many published by Harry Donenfeld, who went on to introduce comic book heroes like Superman and Batman through another company, National Allied Publications (later DC Comics). That makes it all the more intriguing that this issue features a story titled “Bat Man” by Victor Rousseau (writing as “Lew Merrill”). However, while the similarity in name is amusing – and in Batman’s debut, it was styled “Bat-Man” – there’s little reason to believe this story influenced the Dark Knight. There aren’t any caped crusaders here; the lead character in “Bat Man” is John Charters, whose mind is imprisoned in a bat’s body by an evil scientist who has designs on Charters’ beloved. As he slips deeper into the existence of a creature of the night, his chances for regaining his human life and love slip further away.

The entire issue is available here.

Another of the “weird menace” or “shudder pulp” series, in which sadism and torture mingled with seemingly supernatural terrors that turned out to have a rational explanation. The brutality of these stories led to their eventual end after public protest, and horror comics that would one day face their own moment of truth from a Senate Subcommittee investigation in the mid-1950s found their inspiration from pulp titles like this one. In the case of Horror Stories itself, World War II paper shortages spelled the end of this particular series after 47 issues, but for the subgenre of “weird menace” in general, the lurid writing was on the wall. This issue’s cover artist, John Newton Howitt, won a landmark legal case against publisher Street & Smith when he was initially charged sales tax on fees paid for his own paintings.

Read it all here.

See this year’s 2023 Vintage Pulp Horror Calendar for a collection of 13 prints of covers from pulp horror magazines, easily detachable and suitable for framing in a standard sized 11”x14” frame.