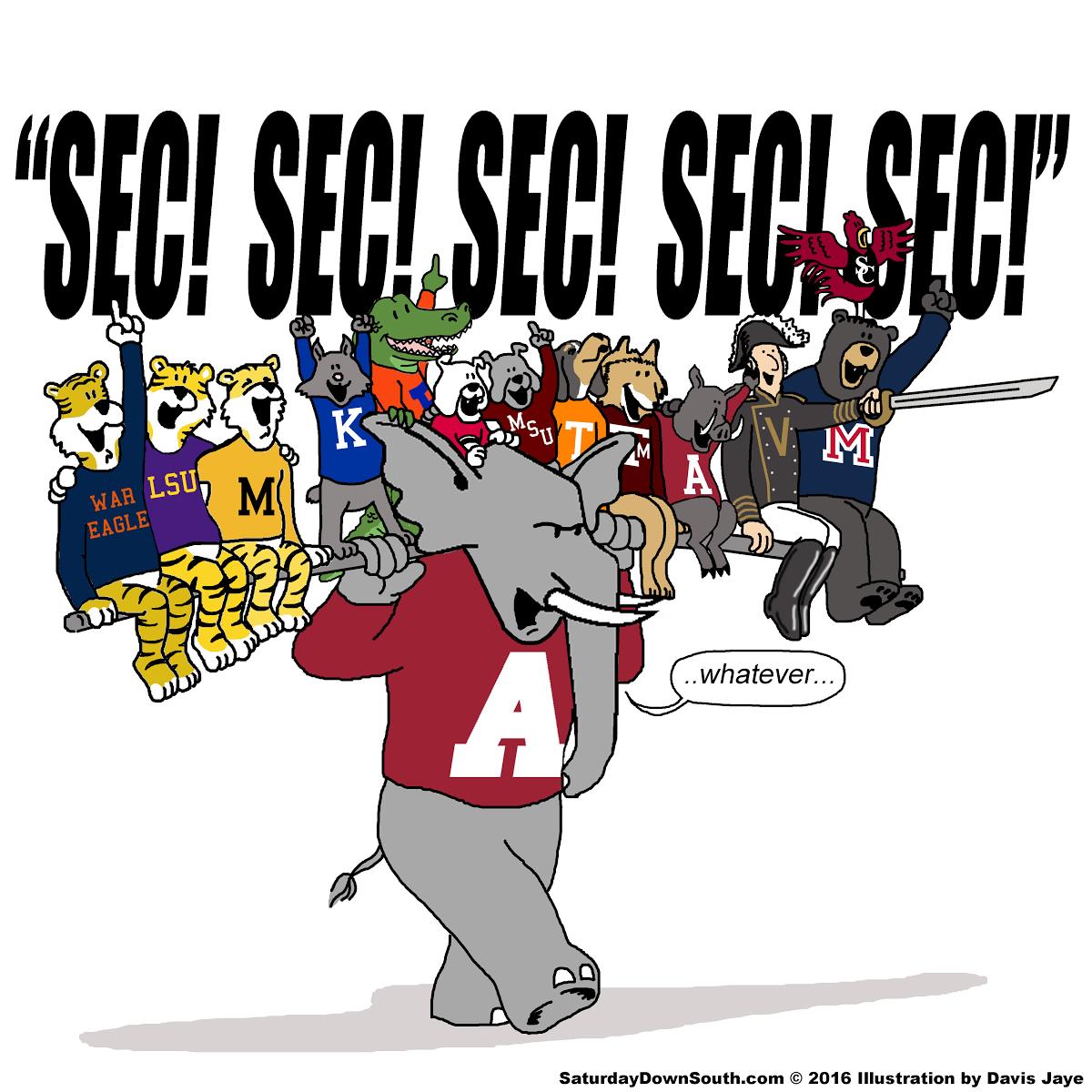 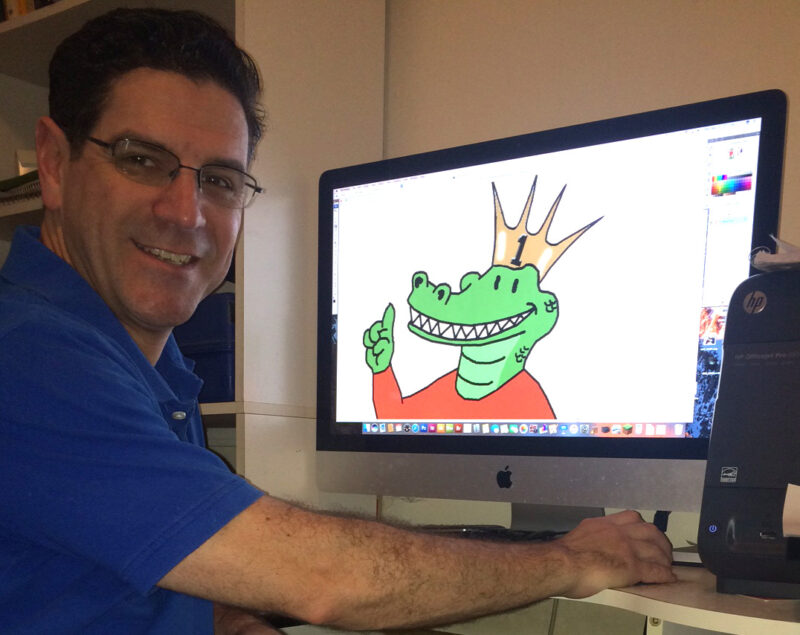 Today we bring you a special edition of Flashback-Friday-Football-Funnies in the form of an interview with a real live cartoonist who makes people laugh for a living.  And that’s no joke!  Davis Jaye makes College Football fans chuckle on a regular basis and his work can be seen on the wildly popular SEC website SaturdayDownSouth.com    Andy had the good fortune and privilege to chat with Davis and he’s happy to share some of the highlights with you below.

Andy A/P:  When did you realize you had a talent for illustrating cartoons and did you have any formal training?

Davis:  I’ve been drawing my entire life.  I did take drawing and painting classes while I was in grade school, and majored in graphic design at the University of Florida.  I started drawing cartoons in 1997 to entertain myself, and have had my own cartoon site, TheSquirrelsNestCartoons.com, for just over two years. 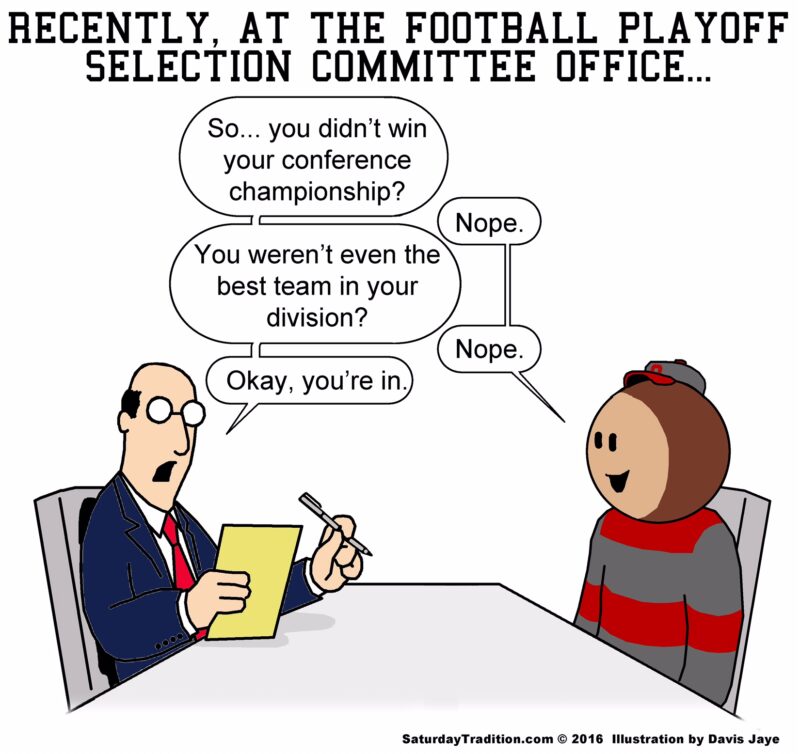 Davis shares his thoughts about the Buckeyes getting into the Playoff last year.

Andy A/P:  You’re work is everywhere :).  Tell us about your love of the Florida Gators and does that ever get in the way of staying neutral when it comes to your cartoons?

Davis:  I grew up cheering for Alabama during the time that Bear Bryant was coach.  My parents are from a small town near Mobile, and my Mom was an alumna of the University of Alabama.  But in 1979, my big brother (Hey, Bob!) enrolled at the University of Florida, and that was all it took to flip me permanently.  I became a rabid ‘Gator fan! I even have an Albert tattoo (wanna see it?).  Five years later I followed him to Gainesville.

I don’t believe I have trouble remaining neutral when it comes to the cartoons.  I may have when I was younger, but now I think I’m able to be objective and admit that maybe my beloved ‘Gators aren’t always the best team in the conference.  For now… 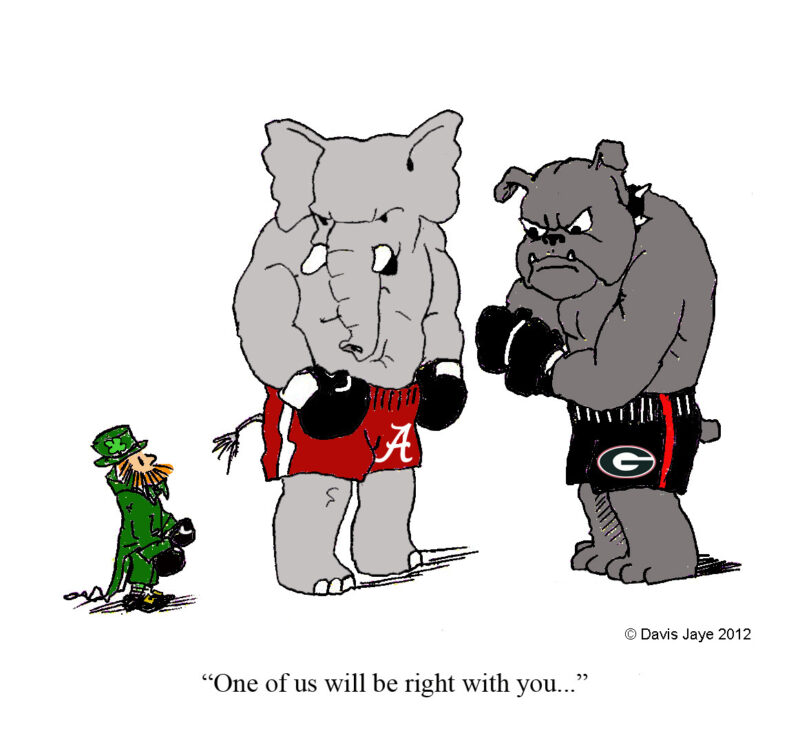 Cartoon for Saturday Down South prior to SEC Championship game in 2012. Winner got Notre Dame. Yes, Bama won.

Andy A/P:  I’ll pass on the tattoo (As a Georgia fan, I’m only interested in tattooing ya’ll on October 28th in J-Ville!).  I’ve been a huge fan of your SEC cartoons ever since they started appearing on the aforementioned Saturday Down South website back in 2012.  I’ve heard that you’ve done some Big Ten cartoons also.   What led to that and where can we find those?

Davis:  Thank you for the compliment!  The Big Ten cartoons are on the website and twitter feed of SaturdayTradition.com  It’s actually a brother site to Saturday Down South.  The wonderful folks there asked me if I wanted to draw cartoons for the Big Ten, and I was more than happy to!  Even though I grew up in Florida, I currently live in the middle of Big Ten territory (just outside of Chicago), so I’m surrounded by those fans, and have always liked Big Ten football anyway. They play for the best trophies!

All the cartoons, both SEC and Big Ten, can be seen on my online portfolio (separate from my cartoon site) at Coroflot.com/DavisJaye.

Andy A/P:  What are your favorite mascots to illustrate and why?  Give us your Top 3 (or more if you’d like)

Davis:  In the SEC, I like illustrating Albert from UF (of course!), Mike from LSU, and Smokey from UT.

In  the Big Ten, Michigan and Wisconsin are my favorite to draw. 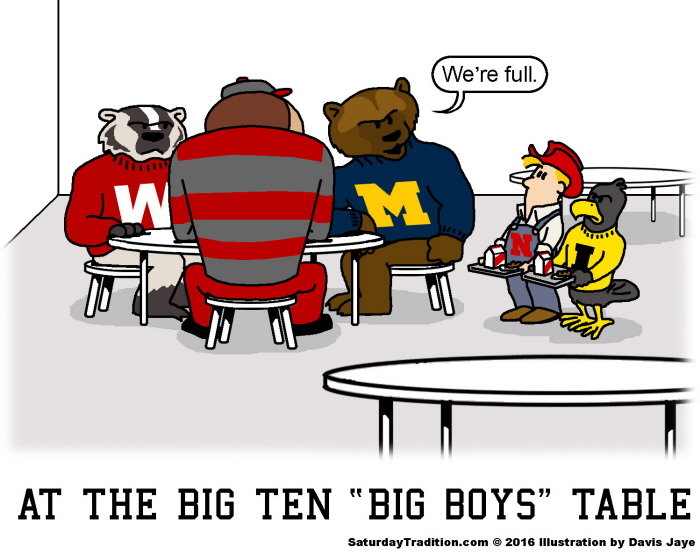 Andy A/P:  What, no UGA?!  Do you ever plan your cartoons “if win” style like hat and t-shirt companies do before big games like the SEC Championship or College Football Playoff Championship game?  I.e, A cartoon for each winner?   Or do you wait for the outcome and then have at it?

Davis:  I do.  Sometimes a cartoon can take a couple of hours to get just right.  Since these are basically editorial cartoons, commenting on recent events (that just happen to be college football games), there is a timeliness to them, and I want the editors to be able to post them as soon as possible (preferably immediately) after a game ends.  Also, sometimes after tailgating and watching a game, I’m not in the “best shape” to draw, if you know what I mean.  So I take care of it in advance while I’m bright-eyed and bushy-tailed, and submit multiple versions to reflect any possible outcome.

Andy A/P:  Ha, ha!  I can relate.  THANKS so much for taking some time out to share a bit of your story with our fans today, Davis!  I recommend that you begin work on the Georgia – Florida “if win” scenario in advance, so might as well break out the red and black illustration utensils now!   Thanks again and looking forward to your next cartoon!

Be sure to stay in toon with the latest from Davis on SaturdayDownSouth.com, Saturdaytradition.com, The Squirrelsnestcartoons.com, and Coroflot.com/DavisJaye. 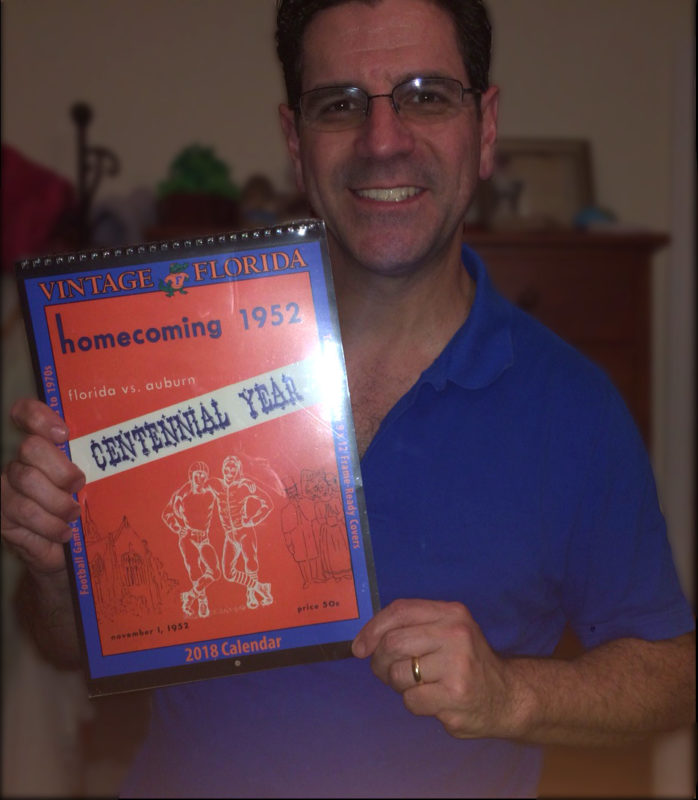 See you back here next week for our next installment and have a great College Football weekend!!